On September 16, 2019, Crain’s Chicago Business published my Op-Ed below. You can also find it in Digital Commons. I am sharing it with you today as my Personal Reflection.

Moving the Needle on Diversity: Why it Matters

Not long after becoming the first Latino superintendent in Illinois’ second-largest school district, Elgin School District, with a student population of 40,000 students, I visited all of our 56 schools. When I visited schools, I introduced myself in classrooms, stating I was the “Superintendent,” which meant I was the “boss of the principals.” In Spanish, I said, I was the “Mero Mero” (the Big guy in charge). As I visited a third-grade classroom at Channing Elementary School, Lissette (not her real name), a 9-year-old Latina girl with big brown eyes and black curly hair said to me, “I want to be a super person like you when I grow up. I’ve never met anyone like you.”

The power of diversity is immediate and personal, especially when seen at the highest levels of organizations.

With the school year commencing, I thought it timely to examine the progress we have made in moving the needle on diversity from corporate boards to c-suites. I wonder if the anti-immigrant racist rhetoric coming from Washington could propel the courage of those in power to advance diversity.

While we allege that we want to see more diversity at the highest levels among boards of directors, our elected officials and in critical fields, such as STEM (science, technology, engineering, and mathematics), we too rarely take the steps necessary to make this diversity a reality. In fact, more often what we find is homogeneity. In Fortune 100 Companies, Caucasian / White persons constitute 80.5 percent of total board seats, while in Fortune 500 companies, total board seats for Caucasians / White was 83.9 percent. Latino(a)s are 4.4 percent and 3.8 percent respectively. The report published by the Alliance for Board Diversity in collaboration with Deloitte concludes that the growth in diversity has been positive, but slow. Women and minorities captured more open board seats in 2018 than at any time in previous history. Yet, according to the 2018 Alliance report, women are barely represented in the boardroom; 25 percent, up from 22 percent, of the board of directors are women. This relative rarity of diverse leaders and the intention to recruit and appoint diverse leadership teams creates its own domino effect. When diverse leaders are appointed to senior positions or boards, they are more likely to meet goals, including hiring more minorities. Diverse leaders move the needle on diversity.

Diverse leadership teams also improve our school systems and educational results. When I led the Elgin School District of 40,000 students, we increased the performance of all students and of diverse populations, their access to Advanced Placement courses, and their academic growth. Our diversity as educational leaders was critical to this success. Within three years, my leadership team became majority-minority and I had appointed 11 minority principals out of 22 as compared to three minority principals appointed in previous years. These actions resulted in increased student growth and increased parent engagement, particularly since many of the newly-appointed leaders were bilingual.

Cloverpop analyzed over 600 business decisions made by 200 different teams over a two-year period. The result was that inclusive teams make better decisions up to 87 percent of the time. Moreover, research by Bain and Co. demonstrates that effective decision making is 95 percent correlated with financial performance. Women and minorities lead businesses to make more money, while a lack of diversity encourages “groupthink” and hurts the bottom line.

The lack of diversity in virtually every field is minimized by a litany of specious excuses. Managers and business leaders say they “just can’t find” diverse talents; that not enough qualified minorities are ready for senior positions or they “just can’t find” minorities to appoint to boards of directors. They can’t find them because they aren’t looking hard enough. The status quo is not only unacceptable, it is not good leadership.

To be sure, neither diverse leaders nor diverse teams can surmount a toxic culture or one that sees diversity as a threat. Diverse leaders are not immune to nor shielded from criticism. I have received my share of criticism for nothing more than being “diverse.” I recently received an email from one of my employees that included the following comment, “Maybe if the administration weren’t filled with diversity hires like you our institution wouldn’t be headed downhill.” And as I continue to move the needle on diversity by hiring extraordinarily executives, who are also diverse, I expect criticism about hiring people who look like me as though previous CEOs did not hire “people who looked like them.”

It is imperative that the leadership in business, education, and other fields reflects the reality of our more diverse world and the need for more multifaceted and creative thinking in decision- making. It is also time we lead with intention in recruiting more women and minorities to lead, not merely because it is the right thing to do, it is what our society is waiting for.

P.S. Here’s a picture of my present Cabinet with their highest education (IMSA’s Leadership Team). From left to right: 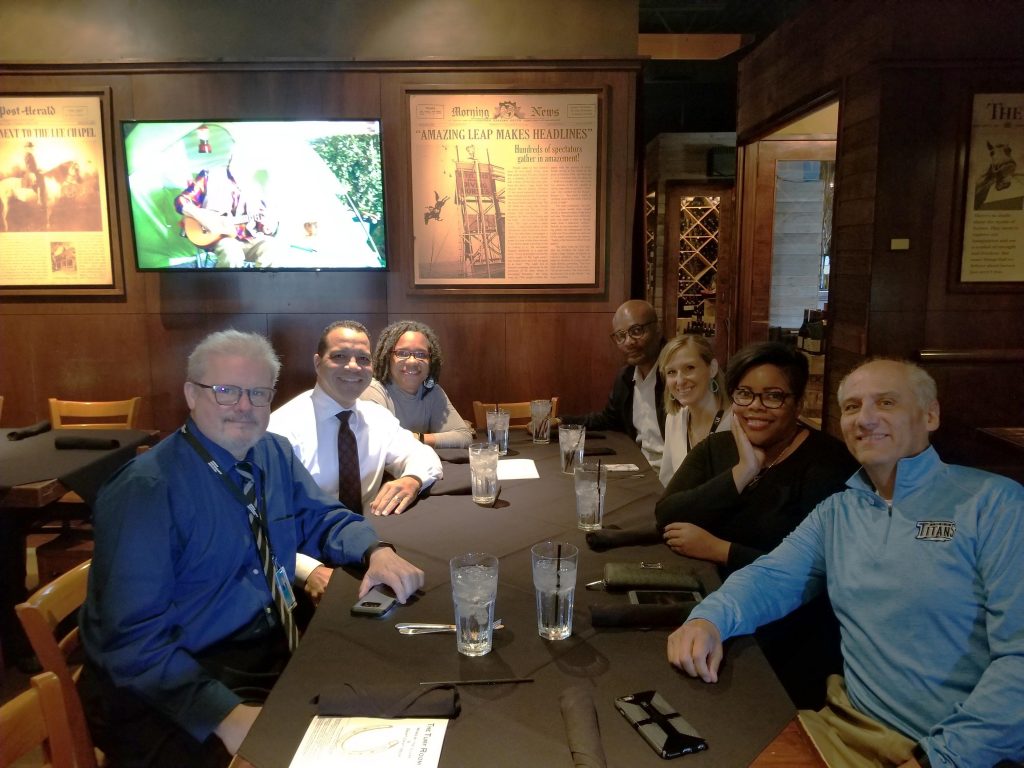