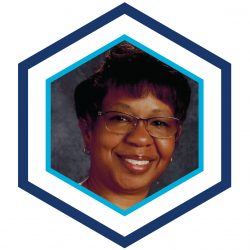 Anita White was born and raised in Pittsburgh, Pennsylvania. She is a product of the Pittsburgh Public School System and received a Bachelor’s Degree in Chemistry from Lincoln University in Pennsylvania and her Ph.D. in chemistry with a biochemistry specialty from the University of Illinois at Chicago. Anita began her teaching career at Oakton Community College in Des Plaines, IL as an adjunct faculty member teaching general and organic chemistry. In 2008, she accepted a position at IMSA as a member of the science faculty. Her primary teaching duties included sophomore chemistry and organic chemistry to juniors and seniors.

Anita is very involved in the efforts to increase the diversity of students in STEM. Since joining IMSA, she has been a part of the PROMISE program for CLED students. In July of 2017, Anita transitioned to the PROMISE Program Director position with oversight of programs for students in grades seven through nine. She also serves as the director for IMSA’s Excel program, the bridging program for incoming sophomore students. In addition, she developed an online organic chemistry course for non-IMSA students and co-developed a blended integrated science program also targeted for CLED students. In 2019, Anita developed the EXCEL 2 program for current IMSA students who have been met with academic challenges. In 2021, Anita joined the Enrollment Management Services department as the Director of Pre-enrollment Programs.

Anita has been the recipient of several awards and recognitions. She was awarded the Principal’s Teaching Award in 2014 at IMSA, the Society of the Chemical Industry (SCI) Scholars Teacher Award in 2015, and INSIGHT Into Diversity Magazine’s 2015 “Inspiring Women in STEM” Award. Anita has many fond memories over her nearly 14 years at IMSA including learning of multiple QuestBridge scholarship recipients, celebrating with students who were accepted to “dream” colleges and taking students to Japan to present their research. One of her favorite IMSA memories, however, was 2018, the year that all four commencement speakers were either PROMISE and/or EXCEL students. It was a very proud day.

In her free time, Anita enjoys traveling nationally and internationally. Her favorite countries are Japan and England. She also enjoys amusement and theme parks and is a major roller coaster fanatic. Her favorite coaster is VelociCoaster at Universal’s Islands of Adventure in Orlando.