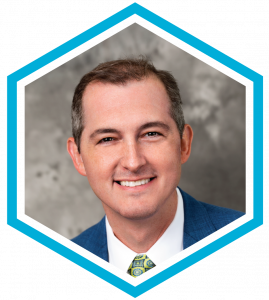 Dr. Joseph W. Turek, MD, Ph.D., MBA is an academic pediatric cardiac surgeon at Duke University in Durham, North Carolina. Since 2017, Dr. Turek has served as chief of pediatric cardiac surgery and executive co-director of Duke Children’s Pediatric & Congenital Heart Center. Prior to Duke, he served in a similar leadership role at the University of Iowa Stead Family Children’s Hospital from 2012-2017.

A native of Petersburg, Illinois, Dr. Turek attended IMSA in the second graduating class. He then graduated from Northwestern University with a degree in biochemistry and received his M.D./Ph.D. (pharmacology) from the University of Illinois in Chicago with Alpha Omega Alpha distinction. He completed his general surgery education at Duke University, where he also finished a cardiothoracic surgery residency. During this time, he served as a visiting congenital heart surgery fellow at Texas Children’s Hospital. Dr. Turek completed a congenital cardiac surgery fellowship at the Children’s Hospital of Philadelphia in 2011. He received his MBA with a concentration in Health Sector Management from Duke’s Fuqua School of Business in 2020.

Board certified in general surgery, thoracic surgery, and congenital cardiac surgery, Dr. Turek has been one of the foremost innovators of the last decade in congenital heart surgery, developing novel operations, modifying techniques, and introducing new products and procedures to children and adults with congenital cardiac disease. Most notably, he performed the world’s first co-transplant of a heart and cultured thymus tissue in an operation that could usher in an era in which solid organ transplant recipients can develop tolerance to their newly transplanted organ, recognizing them as “self”. In another highly innovative operation, he performed the world’s first partial heart transplant for a newborn without functioning aortic or pulmonary valves, maintaining the growth capacity of the newly implanted valves. Additionally, he led the team at Duke in completing the nation’s first pediatric donation after a circulatory death heart transplant with ex vivo reanimation as a means to expand the already limited donor pool of available organs. His clinical passion and expertise lie in high-complexity neonatal heart surgery.