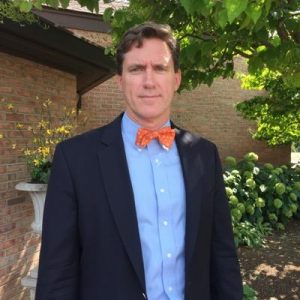 Dr. Lee W. Eysturlid is a history instructor at Illinois Mathematics and Science Academy in Aurora, Illinois. He also serves as an adjunct for Northwestern University’s School of Continuing Studies program. Dr. Eysturlid earned his PhD in history from Purdue University, where he specialized in Intellectual Military History and the Habsburg and Ottoman empires. He is a member of the Citadel Historical Association and is an ABC-CLIO History Fellow. His published works include Philosophers of War: The Evolution of History’s Greatest Military Thinkers (Praeger, 2013) and The Formative Influences, Theories, and Campaigns of the Archduke Carl of Austria (Praeger, 2000).

Dr. Eysturlid currently conducts classes in Ancient World Religions and Philosophy, Conflict in World History, International Relations, Political Theory and World in the 20th Century as well as directing independent student research. The independent research topics Dr. Eysturlid has supervised include the Habsburg Empire, the Antebellum South, Early Modern and Modern Europe, the Ottoman Empire and its Middle Eastern provinces, and a large number of topics in Military History.  In addition to his current courses and independent research, Dr. Eysturlid has taught elective courses in the Second World War, the Cold War, War and the Modern State, the US Civil War, American Military History, and Human Geography; and survey courses in World and Western Civilizations and the History of the United States. Dr. Eysturlid created and continues to run a year-long school-wide academic program on normative Ethical Theory.

Read “The Power of Xi,” one of Dr. Eysturlid’s published articles.