“A STEM Kid”: An Interview with IMSA’s Next President, Dr. Evan Glazer – Illinois Mathematics and Science Academy
Skip to content 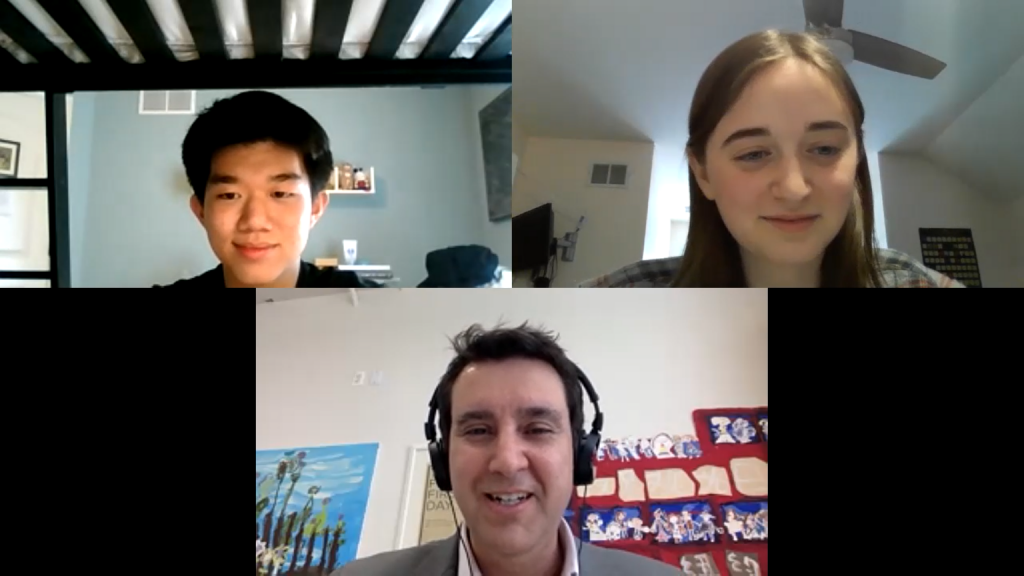 On July 1, 2021, Dr. Evan Glazer will become IMSA’s fifth president. He will succeed President Dr. Jose M. Torres and current Interim President Dr. Norman “Storm” Robinson III. As IMSA enters a crucial phase in its history over the next few months, Dr. Glazer must balance a variety of responsibilities in his new role. The Acronym’s Oliver Ni and Liz Alcala interviewed Dr. Glazer to learn about his STEM background, his goals for his new position, and what he hopes the future of IMSA will look like.

While this will be his first time working at IMSA, Dr. Glazer has had a long history of interacting with our school. During his time working at Thomas Jefferson High School for Science and Technology, Dr. Glazer became acquainted with various members of IMSA staff and administration. According to Dr. Glazer, “teachers at IMSA would go to similar conferences as teachers at TJ. I’ve gotten to know [Dr. Glenn] Max McGee in particular, who was a former president when I was at TJ.” Dr. Glazer saw multiple instances of collaboration between IMSA and TJ, including an alternative energy project shared between them and the High School Affiliated with Renmin University of China (RDFZ), which was ultimately published in TJ’s Teknos journal. Overall, he says that he’s “always had a fond connection to the teachers and students and administrators at IMSA,” due largely to the like-minded spirit that he experienced at TJ.

Much of IMSA’s attraction for Dr. Glazer comes from its integration of STEM into the school curriculum and mission. As a self-described “STEM kid,” Dr. Glazer has always felt strong connections between his passion for the sciences and his current work as an administrator and educator. “[STEM] speaks so much to my identity and who I am…[and] I think it’s super important even among students and colleagues that they feel a certain resonance [to] the culture, the mission of this school.” Dr. Glazer explains that administrative work is akin to engineering, as both fields focus on “a desired outcome that you are trying to attain, and you’re willing to change your methodologies along the way based on formative feedback in order to help you achieve that outcome.”

Another attraction of IMSA is its proximity to his childhood home and the possibility of raising a family in that general area. Dr. Glazer states that “… [A] part that’s super important to me is just being near my home … I grew up in the Chicago area.” Dr. Glazer has resided in Des Plaines, Schaumburg, Hoffman Estates, Skokie, Glenview, Northbrook, and Wheeling. He eventually left to pursue his graduate degree in 1999. After spending years working and studying along the East Coast, he is excited to live close to home with his wife and three children. Dr. Glazer also plans on bringing his family to “special events on campus…You can say they’re all aspiring IMSA students.”

When asked about his approach to being an administrator, Dr. Glazer notes the importance for any school leader to maintain accountability and transparency throughout their tenure. Dr. Glazer recognizes those challenges and prioritizes “having a very large presence on campus [to] give any student or any teacher the opportunity to just chat with what’s on their mind… School leaders have an interest in being transparent and accountable, so a lot of my effort in getting to know the community will be to understand where they perceive any kind of breakdown [in communication or trust] to occur and to be able to address that.”

Dr. Glazer also puts heavy emphasis upon the need for flexibility in both administrative work and the school curriculum. “I’ve heard IMSA referred to as a learning laboratory” he notes, “[so] my interest is in studying the approaches that the school is taking in order to help students and teachers realize that vision and then adjusting those approaches [on] a continual basis to reach that goal.” With such a mindset, Dr. Glazer sees himself not only as an educator but also as a student. “It’s super important to understand the culture of a school… [IMSA] has a group of highly-motivated students and educators wanting to be creative, to be systematic, and to break barriers…so that students can envision projects or initiatives.”

After spending years in multiple schools as an administrator, Dr. Glazer believes that the key to maintaining strong ties to all interest groups in a school lies in building connections. “I walk around school with a sense of inquiry wanting to know what students and teachers are doing and feeling inspired by [those] conversations and then making connections.” In addition to being a listener, he has developed a series of methods that would allow him to foster connections. “I’ve had lunch conversations with student leaders once a week called ‘Dining with Doc’ [at my old school]…[and] having routine monthly meetings with the board of the student newspaper is [another] way of having direct conversations about topics that students are directly interested in.”

Dr. Glazer aims to stay involved with on-campus events in order to fully integrate himself into life at IMSA. “I’m really excited because I just love school communities… and you should expect that I will be a big part of the community.” Dr. Glazer has experience working with students in a variety of ways, and he especially noted that he is “not shy to participate in student productions with the cameo, making a complete fool of [himself] for the entertainment of other people.” He expressed interest in participating in cultural shows and believes “that’s where the appreciation and bonding [within the community] happens.”

Throughout the past few years, IMSA has worked towards becoming “a recognized global leader and catalyst in equity and excellence in STEM teaching and learning, innovation and entrepreneurship,” according to the school’s Equity and Excellence Plan. Yet, it has met its fair share of challenges, ranging from the stories shared in the Black@ISMA Instagram account to reported bias incidents. Dr. Glazer acknowledges those difficulties and stresses that “absolutely, this school should be an inclusive space.” He is also excited to work at a school that prioritizes equity. To explore these issues, he believes that every individual within the IMSA community must “be open about [their] vulnerabilities and invite one other into conversations in order to understand each other better… All of us have blind spots in different ways [in] not just our roles, but other facets of our identity, whether it be our gender, where we live, race, or religion.”

Dr. Glazer has prior experience with promoting equity measures on campus, especially during his time with Avenues: The World School, where a Black@Avenues Instagram account was created and prompted conversations about diversity. “We celebrated and encouraged those students [from the Black@Avenues account] and found that to be meaningful because it allowed students to speak up”. In fact, his administration even named an Inclusion Award after the students who created the account. “So the first part that’s important to me [with my work at IMSA] is thinking how the school environment can move from posting on Instagram to having direct conversations”. He additionally stated that these conversations can build trust and lead to a sense of belonging for students. “That involves being a listening ear… knowing which of the affinity groups on campus need [support] in their initiatives.” In a follow up email, Dr. Glazer mentioned, “While showing up plays a big part, we also have to recognize a single approach doesn’t work for everyone. An equity lens implies the approaches to support student well-being and academic success might vary across the student body. This is really hard work, but worth every minute if everyone’s needs can be met and all students feel they can thrive, particularly those who may have felt marginalized in the past”.

Finally, when questioned about the start of the new school year, Dr. Glazer responds with optimism. Refraining from making any permanent promises, Dr. Glazer says, “…with the announcement of the vaccine now being accessible to people who are 16 and above, that certainly gives a great opportunity for the return to campus.” He goes on to say that he is blessed by “the advancement of science,” which will eventually bring “a high confidence in their [students’] safety.” His previous school in New York has been in-person since September, and his team has developed a set of protocols that have made the campus safe throughout this past year.

As IMSA continues to grapple with uncertainty regarding a variety of issues in its community, everyone is looking towards Dr. Glazer for accountable, transparent, and effective leadership. Dr. Glazer’s optimism and focus on forging connections will be crucial in the beginning stages of his tenure as he looks to build trust with all major interest groups within the school. The Acronym welcomes Dr. Glazer to IMSA and wishes him the best moving forward.